PAGES, VIEWS
Current Research on History and Trends of PHOTO|BOOK|ALBUM 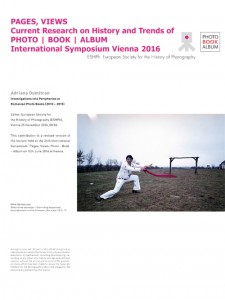 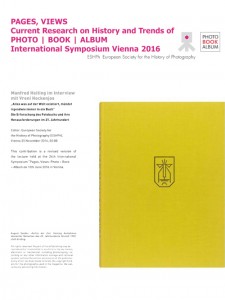 Conference of the European Society for the History of Photography (ESHPh), in co-operation with the German Photographic Association (DGPh), History and Archives Department.

11.45
Johan de Zoete, Utrecht
»The Halftone Process and the Printing-Technology Prerequisites for its Success«

12.15
Manfred Heiting, Los Angeles
»The Challenges Facing the Photobook in the 20th Century«

14.00
Awarding of the »DGPh Grant on the History of German-Language Photo Publications« to Julia Berger by Marjen Schmidt

16.45
Christoph Schaden, Cologne
»›The Other Silence‹. On the Reception History of the Epoch-Making Photobook ›The Silence‹ by Gilles Peress«

Already immediately after photography’s invention there were attempts to reproduce its originals in print, in order to prevent the new, still fragile images from fading and to make them available to broad sections of the population at the same time. After many detours and wrong turnings, there was success in printing photographs, albeit not until the end of the 19th century as the necessary infrastructure of technologies, photographic publishers, printers and media developed only slowly. Despite the close links between the history of photography and the history of its printing, a more general occupation with the photographically illustrated book began only at a late stage. It was only after photography had been able to establish itself on the art market as a result of the sacralisation of the photographic vintage that photography mass-produced in the illustrated book experienced a regular boom in a kind of counter-movement. Following works that take an encyclopaedic approach, such as that by Martin Parr and Gerry Badger of 2004/2006 for instance, and various anthologies on national and regional photobooks, the two-volume work Autopsie. Deutschsprachige Fotobücher 1918 bis 1945 of 2012/2015, edited by Manfred Heiting and Roland Jaeger, most recently attempted to open up the subject of the photobook in numerous facets in a systematically scientific way.

The international conference Seiten, Blicke / Pages, Views. Current Research on History and Trends of Photo / Book / Album in Vienna has been organised by the German Photographic Association (DGPh) together with the European Society for the History of Photography (ESHPh) and is closely associated with the ViennaPhotoBookFestival, which takes place immediately afterwards. Applying a multidisciplinary approach, which takes in literature, art, print and media history, it is devoted in three sections to historical and current aspects of the photographically illustrated book. The conference also forms the framework for the awarding of the “DGPh Grant on the History of German-Language Photo Publications”, initiated in 2013 by Manfred Heiting (DGPh), to the award-winner Julia Berger (Braunschweig) and the publication of the project edited by her, Reise ans Meer. Maritime Bilder in Photobuch und Photoalbum.

The subject initially, in a first, historically-focused section on Book and Photography, is the epistemic changes undergone by the book as a result of photography and the altered perception of photographs in books (Michael Hagner, Zürich). There follow lectures on early experiments in photographic book illustration in the 19th century (Anthony Hamber, London) and on the print technology development of the screen in both letterpress and intaglio, which enabled the mass printing of photographs (Johan de Zoete, Utrecht). The basis for the development of a distinct photographic visual language and of a specific artistic aesthetic of the photographically illustrated book, to which photobook research is devoted, was thereby formed (Manfred Heiting, Los Angeles).

The second, media-historical section Photo Album and Private Photography concentrates on photographs that are not destined primarily for print and a broader public, but unfold their role in the unique photo album as part of a private remembrance culture. The photo album can nevertheless be understood both as a technical and medium-related forerunner and the aesthetic model of the (analogue and digital) photobook (Julia Berger, Braunschweig) and examined comparatively in its specific narrative structures (Annegret Pelz, Vienna). A case study is devoted in addition to the photo albums of the philosopher Ludwig Wittgenstein (Elisabeth Kamenicek, Vienna).

The opener to the third section Photo-Book Today is provided by a programmatic lecture on the tasks of future photobook research (Steffen Siegel, Essen). This is joined by two lectures that deal in particular with the “exhibition function”
(W. Benjamin) of the artistic photobook. At the forefront here is the photographer as image author, who uses the medium of the photobook in order to publish artistic and/or political photographs and, beyond the nature of the photographic print as a unique item, brings them to the art market as art. An analysis of the reception history of the photobook The Silence by Gilles Peress from 1994 (Christoph Schaden, Cologne) is then followed by an exemplary overview of current artistic photobook production in Romania (Adriana Dumitran, Bucharest).

Participation in the conference is free of charge thanks to the support of the following partners:

On this site, we provide full information about the ESHPh symposia from 1981 to 2022 including congress details and participants. We will gradually add more documentary pictures.
If you want to be informed, visit or participate in our next symposium, do not hesitate to contact us.